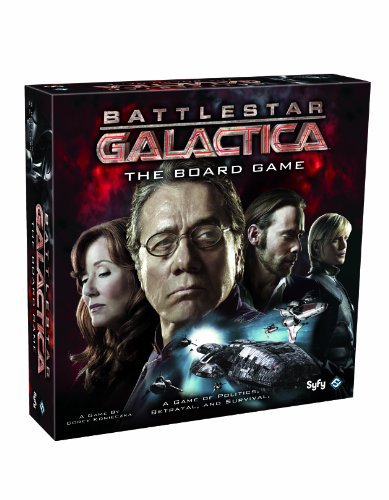 Brand : Fantasy Flight Games
from USA
to Romania
in 9-15 days
At your doorstep by Aug 02  to Aug 08 with standard delivery

The Cylons have attacked the human race. Hoping to escape future attacks, the humans are searching for the next sign post on the road to Earth. But their journey could be in danger as any one of them could be a Cylon agent. Who will escape? Who will survive? Find out with this fun and exciting board game! Battlestar Galactica is a game of politics, betrayal and survival. Based on the epic Sci Fi Channel television show, this game lets you assume the roles of your favorite characters. You can serve as Admiral of the Colonial Fleet, President of the Colonies, or a hot-shot Viper Jockey. This game is recommended for three to six players ages 10 and up. The average playing time is two to three hours per game. Each Battlestar Galactica game come with one rulebook, one game board,10 character sheets, 52 cardboard tokens consisting of four resource dials,10 character tokens, four piloting tokens, two nuke tokens, 12 civilian ship tokens, two basestars, four centurion markers, four basestar damage tokens, eight Galactica damage tokens, one fleet marker, and one current player token. There are also 110 large cards consisting of: 70 crisis cards, 16 loyalty cards, 17 quorum cards, five super crisis cards, one president title card and one admiral title card. Also included are 128 small cards consisting of 21 leadership skill cards, 21 tactics skill cards, 21 politics skill cards, 21 piloting skill cards, 21 engineering skill cards, 22 destination cards and one kobol objective card. One eight-sided die, 32 plastic ships consisting of eight vipers, four raptors, 16 Cylon raiders, four Cylon heavy raiders, four plastic connectors (for resource dials) and 10 plastic character stands are also included, along with a free storage bag.
Show More
Reviews

Battlestar Galactica the board game with free storage bag

Disclaimer: The price shown above includes all applicable taxes and fees. The information provided above is for reference purposes only. Products may go out of stock and delivery estimates may change at any time. Desertcart does not validate any claims made in the product descriptions above. For additional information, please contact the manufacturer or desertcart customer service. While desertcart makes reasonable efforts to only show products available in your country, some items may be cancelled if they are prohibited for import in Romania. For more details, please visit our Support Page.